I love automation in the office, as it elliminates the chance of human error and it gives us time to actually do other things, while giving the boring stuff to our faithful servants, the computers.

We used to have a very time-consuming task that had to be done every morning. It involved downloading a number of reports from various websites, converting them to pdf and merging the pdfs to two different pdf files. The whole process, when it was done manually, used to take approx 40 mins and we had to get it done first thing in the morning.

Using AutoHotKey, I wrote a script that downloads the reports for us every day. It takes the program approx 25 mins to run all the reports. We use one of our spare desktops to run the script, so that we can do other stuff while the autohotkey is working hard for us. For those not familiar with AutoHotKey: the best way to describe it is as a macro language for Windows.

That was a great improvement compared to the manual process, but I thought I could do better than this. This was when I started learning about the arduino board. My idea was as follows: what if I could create a little device with an alarm clock set at 8am every morning, that logs in to the computer and activates the autohotkey script?

Here is an image of the device. I mounted it on an acrylic photoframe from Muji. 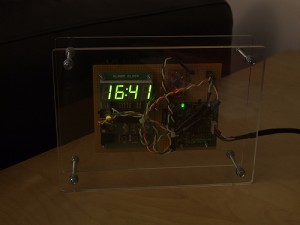 Some of you will say that I’m using a hammer to break an egg. Possibly… But please note that, for security reasons I was not allowed to leave the computer on and unlocked during the night and that the autohotkey actually needs the PC to be on and a user to be logged it (so I couldn’t run it as a service). Also, I know that some of you may be able to wire something like this up without the need of an arduino, but, I admit it, I don’t have a degree in electronic engineering and I am not planning on getting one in the near future! 🙂 I was able to build and get this little device up and running within a few hours. 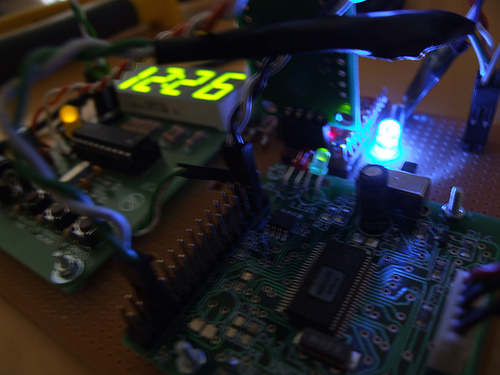 In this example, my device only “wakes up” my machine, but, with very small modifications it could even start the PC (i.e. I could have wired it up in such a way that it actually shorts the pins that connect to the power button).

The most expensive part of this device was the custom keyboard, which (including delivery and import tax) cost me about £85.

One of the things I did manage to do was to remove the transistor from the alarm clock that was converting the voltage from the 9-18V to 4-6V. Then I was able to run it from the power provided by my usb port!

The arduino code was not really hard, just a modified version of the blink example!

Needless to say that I had not added the buzzer on the alarm clock pcb. As you can see on the code, I was using analog in from the buzzer to Pin 2.

This device is, I think, a perfect example of what Arduino is meant to be used for, i.e. helping people creating simple solutions to everyday problems. The program on the Arduino is very straight forward and underlines the fact that sometimes solutions can be easier than previously thought…

3 thoughts on “My arduino clock…”